After Thomas Mayhew purchased Martha’s Vineyard in 1642, his son, Thomas Mayhew Jr set out to begin a colony of families in what was then known as Great Harbor. Little did they know just how great a harbor she would become…

In 1671, the three-year-old son of King James II of England passed away. Great Harbor was incorporated that same year and the name changed to Edgar Towne (the original spelling) in his namesake. Edgar Towne was one of the two original towns on the Vineyard, the other being Tisbury.

By the 1800’s, Edgartown had become a global whaling port. Ships from across the world’s oceans docked in its harbor and the ship’s captains built their magnificent white homes overlooking the water.

This is what led to the common belief that the small ornate rooms and/or rooftop walkways were “Widow Walks”. Folklore tells us that Captains’ wives would pace the walks waiting for their husbands to return from sea. The reality is far less romantic—the walks were commonly built around chimneys and used to pour sand down those chimneys to put out fires. When your house is made of wood, house fires are a bad idea.

The whaling industry did not last forever and Edgartown, like the rest of the island, looked to tourism to sustain it. 123 square miles in area (78% of which is water), Edgartown is full of fantastic hotels, restaurants, shops, art galleries, museums, beaches, and anything else a traveller could want. Edgartown is still known for its beautiful white Captain’s homes and architecture. Many of these homes, on Water Street in particular, are part of the scenery on a sail with Catboat Charters.

An icon of Edgartown Harbor is the Chappy Ferry. The Chappy Ferry runs back and forth a distance of 527 feet and has been running since 1807. The first Captain was Uriah Morse and the fare was .02¢ (.40¢ in today’s dollars) each way. The name of the ferry is the On Time because there was never a set schedule; therefore, it can never be late! They briefly changed the name to “Amity On Time” for the ferry’s JAWS appearance, but that was the only time as far as we know. The original On Time ferry has retired, but the On Time II & III are still in full operation!

Another prominent figure on Edgartown Harbor is Edgartown Yacht Club, of course! The club was founded in 1905 and the current clubhouse was completed in 1927. The EYC includes a Junior Yacht Club, which encourages young people to learn camaraderie through sailing.

At Catboat Charters, we are so proud to be finding our own niche in this extremely prestigious portion of Americana. Each day, we learn more about the history of Edgartown Harbor and we look forward to sharing it with our passengers. Sometimes, we learn new historical points from our passengers—you know, we like that even more? When we have people out on the water who are as absorbed in the history of this magnificent and magical island as we are, we know we’ve found a kindred spirit, a friend. 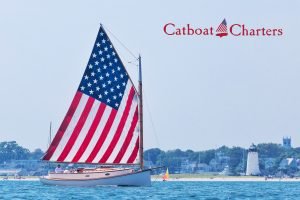