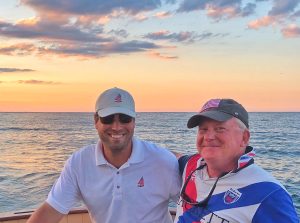 Last night, shortly after six p.m., Captain Kurt and Deckhand Haleigh welcomed guests aboard Tigress for a sunset sail. The night was warm, the sky was mostly clear, but streaked with a few clouds, the makings of the kind of sunset for which Martha’s Vineyard is famous. Captain Kurt does this almost every night during the summer months and to the naked eye, last night was a night just like any other—Captain Kurt and Haleigh welcoming guests aboard Tigress, in Edgartown Harbor; however, these guests were a little different than most. These guests, Chris Wedholm and his wife Pam, have been sailing with Kurt since the very beginning. Their first sail was August 8th, 2015. Last night was Chris and Pam’s fifth sail with the Captain and they’ve seen a lot of changes over the years. 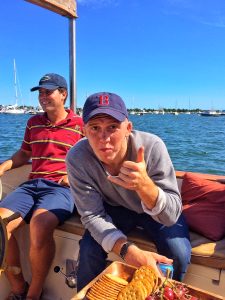 “I first saw Nantucket—Kurt’s first boat—through the lens of a high-powered telescope!” Chris says. “We were staying on Chappaquiddick and my son and I saw this boat with an American Flag sail passing The Edgartown Light! In unison, we said, ‘Who is this guy?’” Chris laughs when he thinks about it now.

Even from a distance, everything about Nantucket spoke to Chris and his family. Chris grew up on Cape Cod, sailing his parents’ Beetle Cat and now, with a son at West Point Military Academy, Kurt’s custom sail touched them all.

“That night we went to The Atlantic on Edgartown Harbor for dinner and there was Kurt moored at the dock! I asked him, ‘Do you ever take people out?’ and he told me that he was just starting to get his business off the ground. He asked me, ‘How about tomorrow?’ and I said yes!” That first sail consisted of Chris, Pam, their son Jack and his best friend. There was no deckhand back then although there have been an assortment over the years including Kurt’s brother, Ryan. Chris also remembers a young girl named Jessie as one who really stood out. “Jessie was a lot of fun. Great personality and welcoming smile! Very funny girl,” says Chris. “The team Kurt has working with him now are fantastic. Haleigh was wonderful—professional and charming. We all loved her.”

One of the biggest—literally—changes Chris has seen over the years is the upgrade from Nantucket to Tigress. Tigress is a much bigger boat. Thirty feet is a large Catboat by any standard, but Kurt handles her with a remarkable deftness. “It’s amazing how well he handles her,” says Chris. “Even the most nervous passenger will be completely set at ease when they see Kurt back that boat into the slip to collect them. That’s a task that can be difficult with a boat that size, but for Kurt—It’s effortless. Kurt and Tigress are made for each other.” High praise indeed. Chris is also impressed by how well Kurt knows the history of Katama Bay, Edgartown Harbor, and the island itself. “He’s full of information!”

“We went out sailing with Kurt for our anniversary last October. That was very special for us. Martha’s Vineyard has become a very special place for us, and being able to work in a sail with Kurt when we visit is just incredible. I would recommend anyone go sailing with Catboat Charters when they go to the Vineyard.”

We’re deep into our fourth season now, and more and more, we are seeing familiar faces. People are making a point of including Catboat Charters in their vacation plans and we can’t tell you how much that means to us.

Chris, Pam, Harley, and Jack, and their friends are everything that Catboat Charters and Captain Kurt believe in. Chris and Pam are very proud parents and they love sharing their lives with good friends. Positive energy begets positive energy. We’re grateful to have them in The Catboat Charters Family.