Catboat Charters sees itself in the unique position of being able to offer a vacation experience made up of three equal parts.

The first part, and probably the most obvious one, is our Tigress. Tigress is a 91 year old, 30 foot, wooden Catboat and that alone makes her a fairly singular experience even in New England. There just aren’t a lot of them around anymore. When Catboats became popular for racing, they started making them out of fibreglass. The fact that her sail has been hand-painted with the stars and stripes of the American Flag makes her one of a kind. The artist behind this incredible feat of patriotism and heart is our second equal part—Captain Kurt Peterson.

Captain Kurt Peterson is our leader and the heart of Catboat Charters. Of that, there can be no question. It was Captain Kurt’s idea to start this business and bring his love of sailing to friends and families who may not otherwise have the opportunity. There are a lot of sailors out there, but we feel that Kurt’s warmth, friendliness, and musical talent, all combine to create a very special human connection with our passengers. That human connection is the reason, hands-down, for our extraordinarily high percentage of return business. We could chalk it up to sailing at sunset, but our reviews say differently. It is Captain Kurt’s charm and old world courtesy that keeps people coming back for more. So what is that third thing? That third piece of our pie? It is Edgartown.

Edgartown was settled in 1642 by a group of families led by Reverend John Mayhew after its purchase by his father Thomas Mayhew. Edgartown Harbor was originally called Great Harbor until its incorporation as Edgar Towne in 1671. Edgar Towne got its name from Edgar, the son of James II of England. Prince Edgar died at the age of three that same year. At that time, Martha’s Vineyard was only divided into two towns—Edgar Towne and Tisbury. The other towns came later.

In the 1800’s Edgartown was one of the globe’s primary whaling ports. Ship captains built beautiful white Captain’s houses that still line Water Street and most of the major streets in Edgartown Village. By the twentieth century, when the whaling industry began to die off, Edgartown turned to tourism as its stock-in-trade.

Edgartown became known as a popular vacation spot for wealthy celebrities, doctors, lawyers, and politicians. A place where they could get away a little off the beaten path. It wasn’t until Senator Ted Kennedy drove off the Chappaquiddick Bridge in 1969 and Stephen Spielberg filmed JAWS in 1975 that the secret of Edgartown was out.

In fact, Captain Kurt quite often sails his Tigress from Edgartown Harbor, Amity in JAWS, and into Katama Bay, where most of the shark scenes in JAWS were filmed. The open ocean was just too hard on the mechanics of the shark. The protected waters of Katama Bay suited him much better.

Those three parts—Tigress, Captain Kurt, and Edgartown all make for a Martha’s Vineyard vacation experience that we are truly proud to bring to you and your friends and families time and again. Every season so far has been better than the one that preceded it and we can’t wait to see you all in 2018! 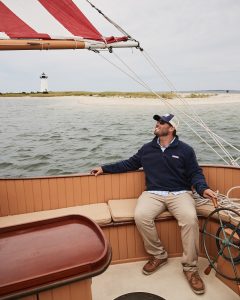